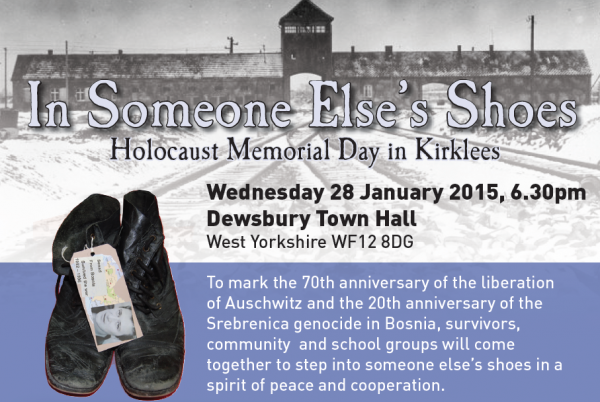 In Someone Else’s Shoes: Image from Flyer

We are pleased to invite you to the Kirklees Holocaust Memorial Day event which will take place on Wednesday 28 January 2015 at Dewsbury Town Hall.  Doors will open from 5.30 onwards. The national theme is Keeping the Memory Alive (taken from a poem by Iby Knill); 2015 is the 70th anniversary of the liberation of Auschwitz and the 20th anniversary of the genocide in Srebrenica, Bosnia.

The Kirklees focus is “In Someone Else’s Shoes”. At a time when innocent people are suffering and dying as a result of armed conflicts and terrorism across the world, it is more important than ever that dialogues remain open and that we do not confuse any faith or race with the actions of particular governments or organisations.  Groups of people across Kirklees have put together decorated shoeboxes containing personal stories of persecution or genocide, combined with background information and requests for people to step into the shoes of someone who is different to ourselves. There will be shoeboxes from Holocaust survivors, Bosnian, Kurdish, Burundian, Hungarian Roma, and Ukrainian communities. the shoeboxes have been exchanged and groups will be responding to one another’s stories.

Kirklees has been chosen to receive a candle commemorating the 70th anniversary of the liberation of Auschwitz, designed by artist Anish Kapoor. There are only 70 of the candles in existence and of the hundreds of events taking place all over the country, the Kirklees event has been selected to host and light one of them. It will be lit by Holocaust survivor Eugene Black and 10 year old Maja who is the granddaughter of a Hungarian Roma woman who survived Auschwitz too.

We hope you will be able to support this important event and the communities and schools participating in it.
With very best wishes

Anyone know somewhere in central Huddersfield where this vital project can be based?*HELP NEEDED**New Premises*As many of you already know, we've been based in the Queensgate Market in Huddersfield for the past 15 months, supporting asylum seekers and refugees living in Kirklees with essential clothing. But the indoor market is closing it’s doors at the end of October and we need to find new premises. Sadly we have not managed to find new premises to date. The project needs a permanent space to continue to run this essential needs service.☀️Size is negotiable, and must have a toilet and little kitchen facility. Ground level for accessibility. It could be an empty shop or building, or a small warehouse etc.☀️Location: Huddersfield, as central as possible. ☀️A parking space for people to drop off donations would be wonderful. ☀️We'd love a permanent home but we’d be happy with a temporary arrangement (6 months - 1 year)Any ideas? Does anyone know anywhere or anyone that could help us? 🙏🏾🤞🏼☀️Please, please, please share this post far and wide - tell everyone you know!☀️Please share this post with your family, friends, work, faith networks, local communities etc...#RefugeesWelcome#TogetherWithRefugees#EssentialNeeds#Community#clothingPovertySupport#ClothingBank#ReuseRecycleRepurpose#SharedGoodsCharity#KirkleesWelcomes ... See MoreSee Less

Great 'Unmasking Pain' session yesterday afternoon. Next one on Wednesday 19th October at 7pm at the Lawrence Batley. You can still get involved if you are managing long term pain, or if you are friends or family of someone in this situation. #veryworthwhile ... See MoreSee Less

How lovely to see this message from our friendly Mayor today.A message from the Mayor of Kirklees as the Jewish communities in the borough celebrate the Jewish New Year. Rosh Hashanah starts today and lasts for two days. It symbolises making a fresh start.The Mayor of Kirklees Cllr Masood Ahmed said: “Rosh Hashanah is a time for people to reflect on the past 12 months and this is something we can all do.“We can also think about our priorities in life and what is important to us – whether that is spending more time with our family or doing more to help others. “To our Jewish communities in Kirklees I wish them a happy Rosh Hashanah.”How is the day celebrated?During Rosh Hashanah , Jewish people will traditionally greet each other with ‘L’shanah tovah’ which means “for a good New Year”.Many families will spend some time at a Synagogue and one of the traditions is to a blow a Shofar which is large horn and is one of the world’s oldest known wind instruments.The sound of the Shofar marks the beginning of the ten day period called the ‘Days of Awe’ which leads up the Jewish festival Yom Kippur. ... See MoreSee Less