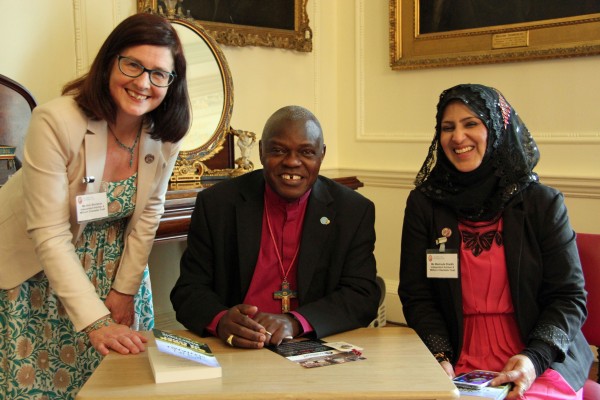 Kim Strickson and Mashuda Shaikh with the Archbishop of York.
Kim Strickson gave him a 6 million+ button badge.
He signed his latest book “On Rock or Sand” to give to them. (Photo: Elizabeth Addy)

The Most Reverend John Semantu has recently become a patron of the Trust and supports the initiative to raise over a million pounds to create a memorial dedicated to the Holocaust and subsequent genocides, as well as an education programme dedicated to examining the situations that lead to genocide and challenging discrimination of any kind. Both of these will be based at Huddersfield University and will work in partnership with the Holocaust Learning Centre being created by the Holocaust Survivors friendship Association.

The event in York was an opportunity for the 6 million+ reps to meet with people from other charities in Yorkshire and tell Dr John Semantu more about the work of the Trust.

6 million+ Trust will be organising activities and an event for Holocaust Memorial Day in Huddersfield for January 2016 with the blessing of Kirklees Council who are no longer leading on the event.

1st set of photos of the Holocaust Memorial Day Event at Dewsbury Town Hall from our official photographer, Malcolm Johnson. Puppets outside and inside. Malcijphotography ... See MoreSee Less

fb.watch/im5reZ2ha2/ Fine poet George Szirtes, whom Adam has been tutored by and read with, reads three of his moving poems for Holocaust Memorial Day. ... See MoreSee Less

Good to see this at the University of Huddersfield.The University will mark Holocaust Memorial Day by illuminating Oastler Building purple this evening.Our campus is home to Holocaust Centre North - a free exhibition open to all which shares a global history of the Holocaust through local stories. ... See MoreSee Less