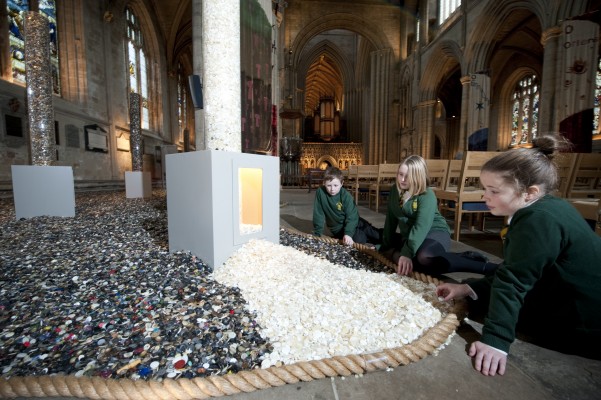 Pupils from Ripon Cathedral CE Primary School, visiting ‘Six million +’, an art installation to commemorate the Holocaust, in Ripon Cathedral. The pupils had helped collect some of the over six million buttons that make up the installation, which was produced by artist Antonia Stowe.

Press release follows:
6 million +, Every person counts, is a artwork of 6 million buttons, each one representing someone killed in the Holocaust and it will be mounted at the Cathedral from January 13th until February 20th. The ‘+’ refers to Jewish and non-Jewish individuals who were not counted and the millions who have died across the world in genocides since the Second World War, and children from local schools have been collecting buttons to add to the exhibition.

The installation was originally designed by Leeds based artist Antonia Stowe who was commissioned to work with the Kirklees Museums & Galleries.

This site uses Akismet to reduce spam. Learn how your comment data is processed.